Finale Ligure: the perfect holiday in Liguria
Sport, sea, history and unique events in the world

Finale Ligure: the perfect holiday in Liguria
Sport, sea, history and unique events in the world

The Finale Freeride Outdoor Village camping resort is a campsite located in Finale Ligure, in the province of Savona, and is one of the most beautiful and important tourist cities in Liguria.

The beaches of Finale are famous for their golden sand and crystal-clear water. The seaside and the elegant promenade are in fact populated by tens of thousands of tourists from all over Europe every summer.

But Finale Ligure is not just Sea and Relax …

Over the years, in fact, thanks to the extraordinary territory endowed with unique characteristics, the Ligurian city has become a world reference point for mountain biking and climbing enthusiasts.

Finally, Finale Ligure also has a thousand-year history and it’s full of surprises. It is possible to find traces of settlements already in prehistoric times (attenzione al testo italiano, ci sono errori), as evidenced by the numerous finds kept in the city museums. And Finalborgo, included in the list of the most beautiful cities in Italy, testifies to the glory of a flourishing and fruitful medieval culture.

Here is some information that we at the Finale Freeride Outdoor Village campsite have decided to collect to help you better understand how our territory is structured…. 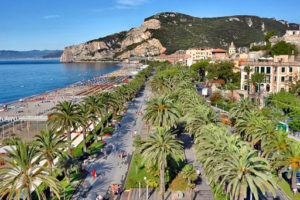 Finale Ligure is one of the best known towns of the Riviera di Ponente and is located east of Capo di Caprazoppa and includes the inhabitants of Finalmarina , the neighboring Finalpia , and towards the hinterland, of Finalborgo.

The territory is of particular historical importance; it was in fact intensely frequented already in prehistoric times, as evidenced by the archaeological finds found in the Caves of the Finalese including the most famous, Arene Candide and Polléra. In the Middle Ages it belonged to the Del Carretto family who made it a powerful Marquisate with its capital in Finalborgo. Over the centuries, the Genoan, Del Carretto and Spanish dominations alternated. 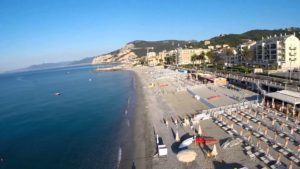 It is the most modern and developed part of Finale, parallel to the coast and to the beautiful promenade Italia characterized by the typical plants of the Riviera, palm trees.

A highly sought-after destination by seaside tourism for its mild climate and its crystalline waters (annually winner of the international Bandiera Blu (Blue Flag) award reserved for places that stand out in the sustainable management of the territory). A must-see are the most beautiful free beaches in this area: Spiaggia dei Neri and Spiaggia del Castelletto.

The central alley opens onto Piazza Vittorio Emanuele II and the Arch of Margaret of Austria which commemorates the passage of Leopoldo I’s future bride. Still to be remembered, the majestic and imposing church of the Capuchins, San Giovanni Battista. On the foot of the hill, Castelfranco represents the main coastal military fortification. 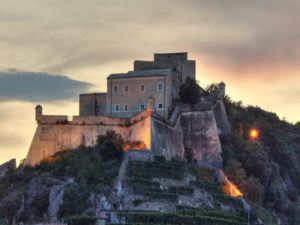 Finalborgo represents the historical and cultural center of Finale Ligure and with good reason it has earned a place among ” the most beautiful villages in Italy “.

Its walled village, dating back to the 13th century, is surrounded by high crenellated walls and defended by towers in correspondence with its two main gates: Porta Testa and Porta Reale . Entering the village through Porta Reale, the collegiate church of San Biagio peeps out, now in Baroque style but built on the previous Gothic structure. Magnificent is the complex of Santa Caterina which is today the seat of the Civic Museum of Finale; here you can discover interesting archaeological finds from prehistoric times to the medieval era. Other notable buildings in Finalborgo are the Palazzo del Tribunale, Palazzo Brunenghi and Arnaldi.

Separate chapter dedicated to the two most iconic structures, the fortress of San Giovanni and the Govone castle . The first can be visited on weekends but it is always good to check the timetables on the dedicated website; in the same are organized parties and shows especially in summer. The second is being restored, therefore not accessible but the beautiful cobbled path and the view of the castle framed by the green valley, makes up for this temporary lack.

In Perti, the area where the campsite is located, the church of S. Eusebio preserves the Romanesque crypt while a little further on, in the silvery green of the olive trees, stands the church of Nostra Signora di Loreto, locally known as the Chiesa dei Cinque Campanili . 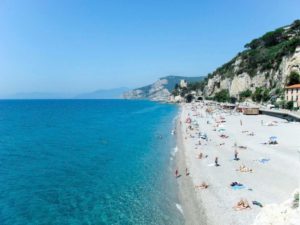 It can be found coming from Varigotti, immediately after the Tourist Port of Finale. The old village develops around the Roman-Gothic church of Santa Maria di Pia and the adjacent Benedictine Monastery , with its well-kept cloisters. From Final pia there are excursions to the Altopiano delle Manie and Val Ponci (with the very famous path of the Cinque Ponti Romani ), Calvisio, Boragni and Voze. (controllare il testo italiano: c’è una parola in più “saraceno”) 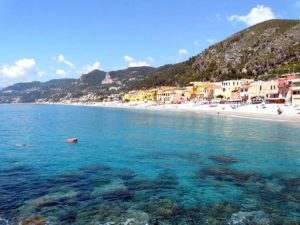 Although it is located 5 km from the center of Finalmarina, the beautiful Saracen village of Varigotti also flows into the Municipality of Finale Ligure. Important tourist destination chosen by many Italian and foreign tourists for the unique and relaxing atmosphere that reigns in its small streets. The colored plasters of its buildings, the references to seafaring life and the Bougainvillea plants are a delight for the eyes. The most beautiful beaches are Punta Crena and Baia dei Saraceni .

FinaleFreeride Outdoor Village is located in the beautiful countryside of Finale Ligure’s, less than 1 km from Finalborgo. The sandy beach is only 4 km away and about 10 minutes by car, 15 minutes by bicycle and 45 minutes by walk from the village. The bus service connects the campsite to the center and to the sea with twelve trips a day.

How to get to the village

From Finale Ligure’s railway station
Turn right on via Domenico Brunenghi. At the roundabout, take the 1st exit onto Strada Statale 1 for 350 meters. Sharp right onto via Caprazoppa, heading North for about 1.5km. At the roundabout take the 1st exit and, after the bridge, turn left onto via per Calice. Drive for about 1,7 km. The village is on the left, just before the filling station.

From Genoa’s airport
Head on via Pionieri e Aviatori d’Italia. At the roundabout take the 1st exit and slight right onto the slip road to Sestri Ponente Centro/Autostrade. Merge onto A10 towards Ventimiglia (toll road). Follow the A10 for 62 km and take exit Finale Ligure. Follow the street for about 1.5km, then turn left onto Strada di Gorra SP490. At the roundabout take the 2nd exit and, after the bridge, turn left onto via per Calice. Drive for about 1,7 km. The village is on the left, just before the filling station.